The Supreme Court issued its opinion today in National Labor Relations Board v. Noel Canning, a case primarily centered on (a) when recess appointments can be made by the President, and (b) whether or not the vacancy needed to occur before or after Senate went into recess.  Just as a refresher, Article II, Section 2 of the Constitution says that “the President shall have Power to fill up all Vacancies that may happen during the Recess of the Senate, by granting Commissions which shall expire at the End of their next Session.”  So, in an opinion of the sort that causes non-lawyers to hate lawyers, Justice Breyer discusses the meaning of the words “the” and “during”…over the course of 41 pages.

The good news though, is that this opinion cites a great deal of historical research.  In reading the opinion, I don’t think I’ve seen this much evidence of pure history footwork since Boumediene v. Bush (2006) or District of Columbia v. Heller (2008).  Somewhere, some history Ph.D.’s have earned their keep for the past few years by pawing through the nation’s archives for this case.

Here, for example, is part of Breyer’s opinion discussing the meaning of the phrase “that may happen during”; the controversy is whether or not the President has the authority to make a recess appointment if the vacancy occurred prior to the Senate recessing:

Historical practice over the past 200 years strongly favors the broader interpretation. The tradition of apply- ing the Clause to pre-recess vacancies dates at least to President James Madison. There is no undisputed record of Presidents George Washington, John Adams, or Thomas Jefferson making such an appointment, though the Solicitor General believes he has found records showing that Presidents Washington and Jefferson did so. We know that Edmund Randolph, Washington’s Attorney General, favored a narrow reading of the Clause. Randolph believed that the “Spirit of the Constitution favors the participation of the Senate in all appointments,” though he did not address—let alone answer—the powerful purposive and structural arguments subsequently made by Attorney General Wirt. See Edmund Randolph’s Opinion on Recess Appointments (July 7, 1792), in 24 Papers of Thomas Jefferson 166 (J. Catanzariti ed. 1990).

President Adams seemed to endorse the broader view of the Clause in writing, though we are not aware of any appointments he made in keeping with that view. See Letter to J. McHenry (Apr. 16, 1799), in 8 Works of John Adams 632–633 (C. Adams ed. 1853). His Attorney Gen­eral, Charles Lee, later informed Jefferson that, in the Adams administration, “whenever an office became vacant so short a time before Congress rose, as not to give an opportunity of enquiring for a proper character, they let it lie always till recess.” 36 Papers of Thomas Jefferson 433. We know that President Jefferson thought that the broad interpretation was linguistically supportable, though his actual practice is not clear. But the evidence suggests that James Madison—as familiar as anyone with the workings of the Constitutional Convention—appointed Theodore Gaillard to replace a district judge who had left office before a recess began. Hartnett, 26 Cardozo L. Rev., at 400–401. It also appears that in 1815 Madison signed a bill that created two new offices prior to a recess which he then filled later during the recess. See Act of Mar. 3, ch. 95, 3 Stat. 235; S. J. 13th Cong., 3d Sess., 689–690 (1815); 3 S. Exec. J. 19 (1828) (for Monday, Jan. 8, 1816). He also made recess appointments to “territorial” United States attorney and marshal positions, both of which had been created when the Senate was in session more than two years before. Act of Feb. 27, 1813, ch. 35, 2 Stat. 806; 3 S. Exec. J. 19.

Add to that a multi-page appendix tracking every recess taken by the Senate, well, ever, and you have a fairly interesting (if dry and technical) read on a more obscure Constitutional provision.  This being the first time the Supreme Court had ever directly confronted the issue of recess appointments, the justices broke down on fairly ideological lines (originalists versus an alliance of pragmatists and “living Constitution” justices).

Scalia, as usual, had a fun concurrence (since the judgment was technically unanimous, but the opinions were split 5-4 – in other words, they all agreed on the what, but not on the why).  In his concurring opinion, Scalia uses the same primary sources to bash the majority’s reasoning:

In 1792, Attorney General Edmund Randolph, who had been a leading member of the Constitutional Convention, provided the Executive Branch’s first formal interpretation of the Clause. He advised President Washington that the Constitution did not authorize a recess appointment to fill the office of Chief Coiner of the United States Mint, which had been created by Congress on April 2, 1792, during the Senate’s session. Randolph wrote: “[I]s it a vacancy which has happened during the recess of the Senate? It is now the same and no other vacancy, than that, which existed on the 2nd. of April 1792. It commenced therefore on that day or may be said to have happened on that day.” Opinion on Recess Appointments (July 7, 1792), in 24 Papers of Thomas Jefferson 165–166 (J. Catanzariti ed. 1990). Randolph added that his interpretation was the most congruent with the Constitution’s structure, which made the recess-appointment power “an exception to the general participation of the Senate.” Ibid. (footnote omitted).

President John Adams’ Attorney General, Charles Lee, was in agreement. See Letter to George Washington (July 7, 1796) (the President may “fill for a limited time an old office become vacant during [the] recess” (emphasis add­ ed)), online at http://founders.archives.gov/documents/ Washington/99-01-02-00702; Letter from James McHenry to John Adams (May 7, 1799) (hereinafter 1799 McHenry Letter) (conveying Lee’s advice that certain offices were “‘vacanc[ies] happening during the session, which the President cannot fill, during the recess, by the powers vested in him by the constitution’”), online at http:// wardepartmentpapers.org/document.php?id=31766.  One of the most prominent early academic commenters on the Constitution read the Clause the same way. See 1 St. George Tucker, Blackstone’s Commentaries, App. 342–343 (1803) (assuming the President could appoint during the recess only if “the office became vacant during the recess”).

Two justices, the same primary sources, and diametrically opposite interpretations of those sources.  Professional historians may scoff at what I’m about to say, but being a lawyer can, in some rare circumstances, be like being a historian – just with a more limited number of sources, with more of an axe to grind (or at least a finer point to grind said axe to), but with just as much variety of opinion on how to interpret the historical record.

Of course, historians rarely get to argue with their long-dead subjects, as Scalia does here:

More fundamentally, [William] Wirt [Aaron Burr’s prosecutor and ninth Attorney General, serving Monroe and Adams the latter; died, 1834] and the majority are mistaken to say that the Constitution’s “‘substantial purpose’” is to “‘keep . . . offices filled.’” Ibid. (quoting 1 Op. Atty. Gen., at 632). The Constitution is not a road map for maximally efficient government, but a system of “carefully crafted restraints” designed to “protect the people from the improvident exercise of power.” Chadha, 462 U. S., at 957, 959. Wirt’s and the majority’s argumentum ab incon­venienti thus proves far too much. 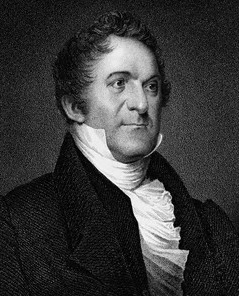 Billy, you just got served…

The opinion itself is here.  For background, a great plain english explanation of the ruling is available at SCOTUSblog.